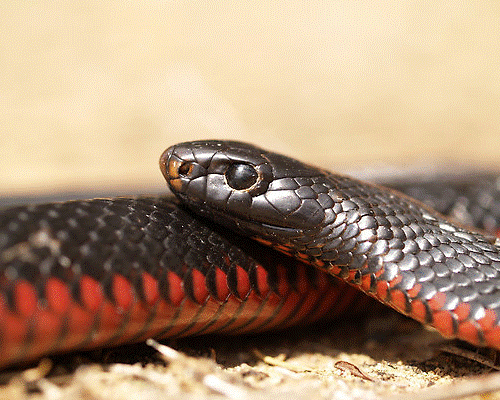 The second most common snake found in and around The Adelaide Hills and metro area. It has a glossy appearance in black with an underbelly colour ranging from bright red to pink or orange, even sometimes with no apparent colour.

The Red Bellied Black Snake loves water, so ponds, creeks and dams are a favourite habitat whilst feeding mainly on frogs, fish and yabbies and occasionally rats and mice.

It is not an aggressive species but it’s venom is capable of causing significant morbility, it is not generally fatal and less venomous than the brown snake.

Red Bellies are ovoviviparous meaning they give birth to live young and can have up to 25 babies at around 20cm in length and grow to around 2 metres.

Observations over many years of working with this reptile we have found that the Red Bellied Black Snakes can live in colonies of parents and juveniles growing and living together.

The bite of a Red Bellied Black Snake is very dangerous and requires immediate medical attention.